A Brief History of Anma 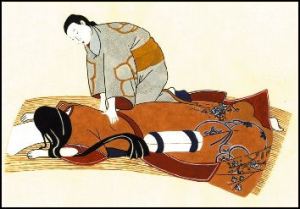 In Japanese, Anma refers to massage or massage practitioner.  It is the oldest known form of traditional Asian massage which is believed to have originated in Tibet and China.  Anma is a “dry” massage and does not use oil or lotion.  It developed over several centuries, beginning in its early forms in central or northern China thousands of years ago.  It involves stretching, squeezing and massaging to stimulate the body to become and/or remain healthy.  It originally was used to warm the body when it became cold from the climate, then it was discovered that aches and pains could be alleviated as well.  Over many years and after many trials, the practitioners learned which specific areas were the best to manipulate to promote health.  With the unification of China during the Han Dynasty, an effort was made to systemize and combine the various healing arts, such as Moxibustion, Acupuncture, and Herbalism, which had been developed in other parts of China.  It was during this time that Anma came to Japan.

Anma is one of the oldest forms of massage in the world and the first massage method recorded in written form that still exists today.  It is unknown exactly how long ago Anma began to be practiced but it is likely at least 5,000 years and it may even go back as far as 10,000 years.  Anma became a written system of massage and treatment over 2,500 years ago.

By tracing the history of other forms of massage, it is shown that Anma is the origin for many methods, such as Shiatsu, Swedish massage, and Tui-na.  Anma has influenced forms of massage and health care throughout the world for at least 2,500 years.

During the fifth century, monks travelled from China to Japan bringing their religion and medical knowledge with them.  Over many years, this knowledge disseminated throughout the countryside and began to be widely accepted.  Shiatsu developed as an offshoot from Anma.  While both involve rubbing, rotating, kneading and other similar therapies, Shiatsu uses much more pressure as part of its therapeutic technique.  Hence the Shiatsu practitioner will tend to use both Anma and Shiatsu techniques while the Anma practitioner will use only Anma techniques.

Anmo-Anma is the foundation of all East Asian medicine, is the oldest known method of Eat Asian medicine and currently exists in Japan, China and Korea.  In Japanese and Korean, the pronunciation of the method is Anma; in Chinese it is pronounced Anmo.  It was brought to Japan in the 7ths Century from China through Korea.  As a Japanese massage therapy, it has developed unique properties and treatments from its Chinese and Korean counterparts.

Some of you may be familiar with concepts contained herein, while some of you may be novices to massage.  Briefly, Anma is a small part of the traditional East Asian medicine, along side of other more familiar aspects such as acupuncture, moxibustion or Chinese and Japanese herbal medicine.  Anma is the traditional East Asian hand manipulation therapy, similar to massage.  Shiatsu grew out of Anma therapy and has had several addictions, which make it a separate, but related discipline.

There are three methods of massage regulated and approved by the Department of Health and Welfare in Japan today:  Anma, Massage (Western style oil massage), and Shiatsu.  Anma is the oldest and most popular of the three forms of bodywork.  Western massage was introduced to Japan over a century ago and Shiatsu was created early this century.

In modern days, Anma means massage or massage therapy, but literally it translates as “press and rub.”  Students often ask “What is Anma?”  I answer that “it is one of the traditional Japanese performing arts, the art of Japanese massage.”